Curving along the south-eastern tip of Phuket, the northern shore of Rawai beach is the home of sea gypsies known as Chao Lay. The sea is their life and livelihood.

Children splash and shriek floating on plastic ice box lids and pieces of broken board alongside long-tail boats anchored to the beach by long lines, bobbing lazily in turquoise waters.

A rainbow of freshly caught fish lie lifelessly on metal counters alongside plastic trays packed with shellfish on ice. Over-sized, water-filled tubs placed on the ground in front of stalls crawl with live crabs and crayfish.

Locals and tourists browse and buy seafood then cross the road to one of the open-fronted restaurants where, for a small fee, the kitchen serves it up in the dish of choice.

Check out my post Phuket Snapshots: Rawai Beach and Local Life at Rawai Beach on the informative Jamie’s Phuket Blog.

Also, read the eye-opening article Tourism imperils way of life for Thai sea gypsies to learn about the plight of the Chao Lay. 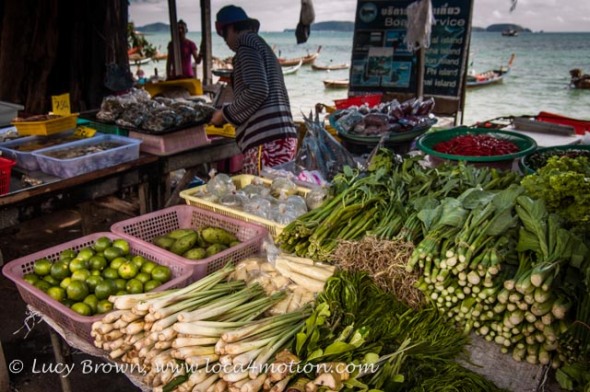 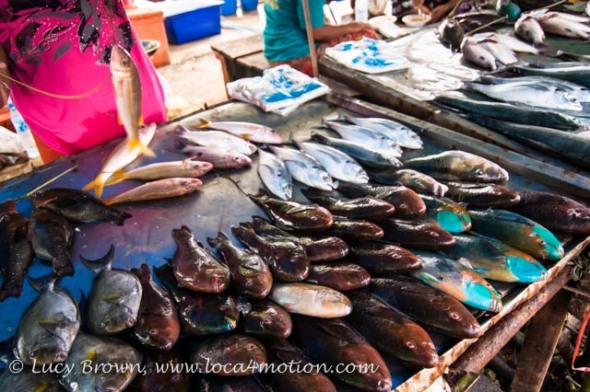 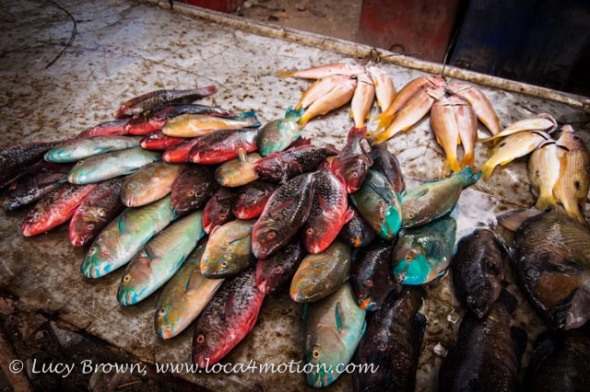 Close up of colorful fish

Another fish close up 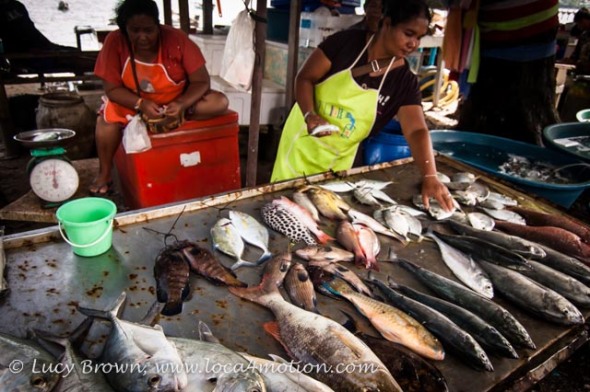 Array of fish at a beachside stall 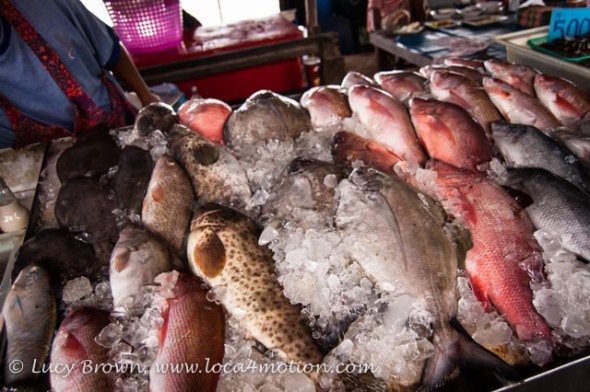 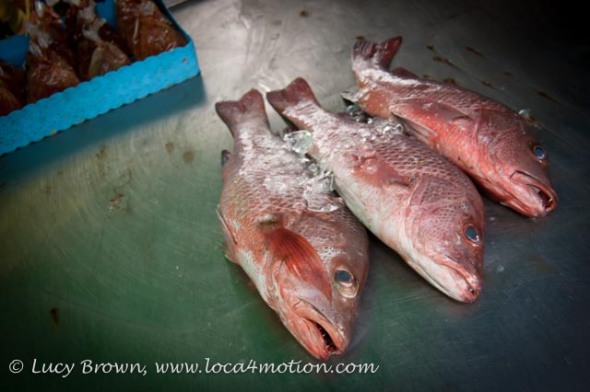 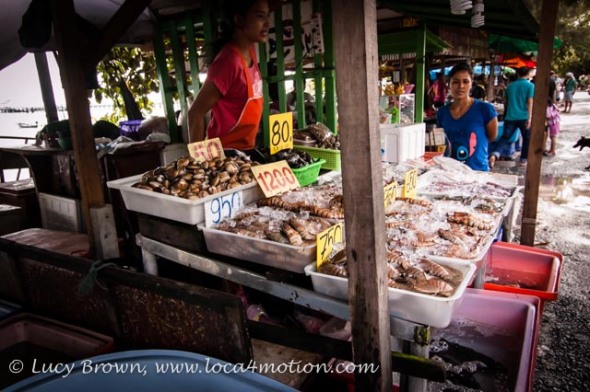 Beachside shellfish stall. Prices are in Thai baht per kilo

Children playing behind the stalls 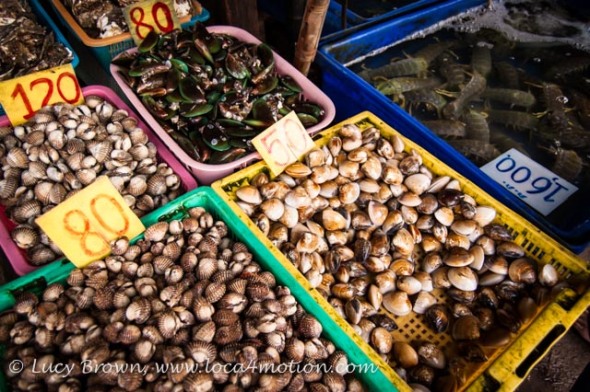 Fish trap on the beach

Close up of dead puffer fish

Beachside shrine under a tree. Offerings include bottles of red Fanta soda and a model ship to protect the fishermen

Long-tail boats moored off the beach

Fish traps by the beach 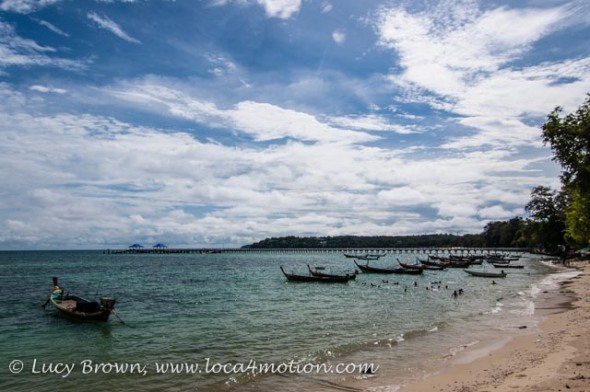 Traditional houses crammed together on a series of jetties linked by wooden walkways perch on stilts over the sea. These are George Town’s Clan Jetties.

Built in the 19th century, communities of fishermen, traders and dock workers still live with their families on these austere clan jetties along the shores of historic George Town in Penang, Malaysia.

A few hours exploring by foot along George Town’s clan jetties was one of the highlights of my short trip to Penang. I love waterside living and these simple homes appealed to me. Each clan jetty is unique in character, some more rustic and unkempt than others.

Here’s a series of some of my images captured that afternoon. Check out my earlier post Penang Snapshots: Historic George Town Scenes.

A gaudy Chinese temple dominates the entrance to the workmanlike Chew Jetty. Bathed in bright sunlight blue boats moored along the boardwalk, rock lazily on the tide.

Chinese lanterns, bamboo birdcages and handmade fish traps hang outside humble homes, cozy stores and simple eateries. Laundry hangs drying under eaves, bicycles lean against walls and motorbikes stand among the clutter of everyday living. Fragrant incense glows at the seaward tip of the jetty in a Chinese shrine with a sea view. 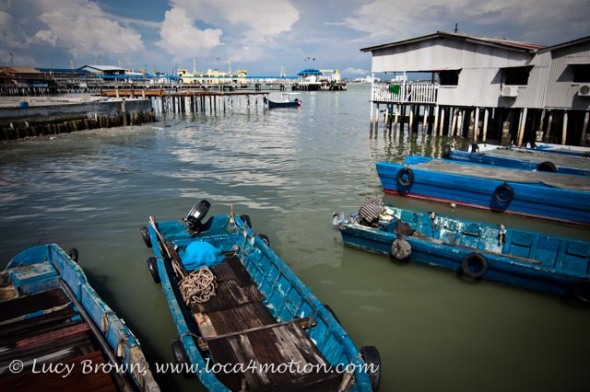 View from Chinese temple at end of Chew Jetty

Outside kitchen at end of Chew Jetty 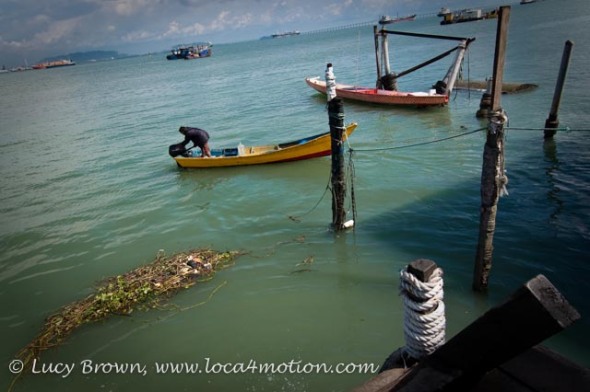 Boats at end of Chew Jetty 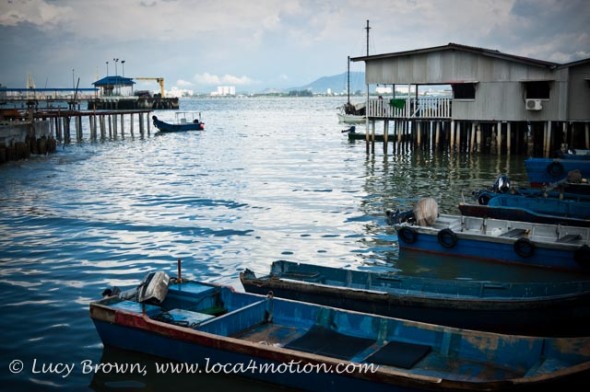 The most basic jetty I walked along had no name at the entrance. I ended up staying a while, prisoner of a sudden storm.

Luckily I found a broken plastic chair to sit on under an open-sided shelter full of fishing nets, my view misted by stinging rain; a ramshackle jetty village perched on stilts over a low tide stream clogged with tangles of broken logs, like skeletal remains emerging from the dark, stinking mud.

View of next jetty at low tide during a storm

Sunken boat at end of jetty

View of next jetty during a storm

View of next jetty

As the rain subsided, I continued to the neater, homier Lee Jetty. A small Chinese shrine protects the entrance leading to an avenue of crimson Chinese lanterns, green wheelie bins, street lights and gaudily painted door and window frames with matching metal fences outside.

A muddle of antennas, cables and satellite dishes hang overhead. Offerings lay at simple Chinese shrines guarding each house. Bundles of incense glow in sacred pots placed on the boardwalk end, facing seaward towards the city skyline and a yellow jetty temple across the water. 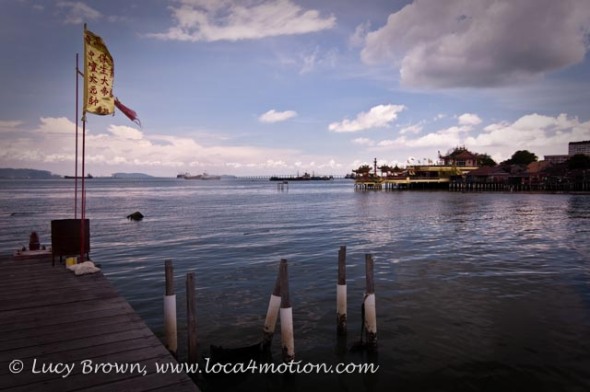