International Living recently published my article about a unique Guatemalan horse race with drunken Mayan jockeys. Below is my original submission with many more than the one photo published with the article. 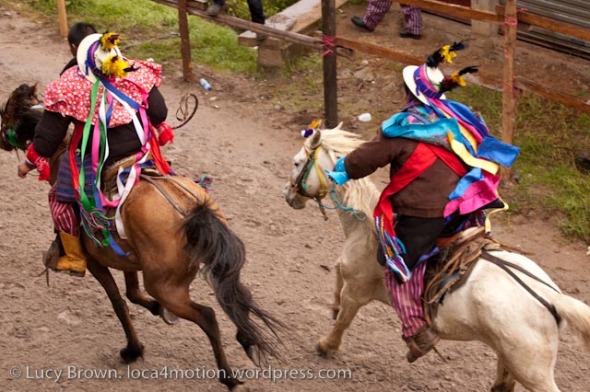 My childhood dream  was to explore the world, treading in the footsteps of past explorers while discovering the wonders of its landscapes and people for myself.

After many long stints of traveling and returning to save for my next trip I qualified as an EFL (English as a Foreign Language) teacher and spent over five incredible years teaching in Thailand before hitting Latin American soil.

AWAI travel writing and photography workshops opened doors to an entirely new world and I’m now based in the beautiful colonial city of Antigua in Guatemala living my dream as a travel writer and photographer.

Last year I headed with a friend to the remote village of Todos Santos just over 8000 feet above sea level in the northern Guatemalan highlands.

We went to witness the famous annual festival with inebriated, traditionally clad locals racing horses on All Saints’ Day on November 1. All-male jockeys, hardy residents of Todos Santos, spend a sleepless night beforehand ritualistically drinking themselves into an alcohol-induced stupor. 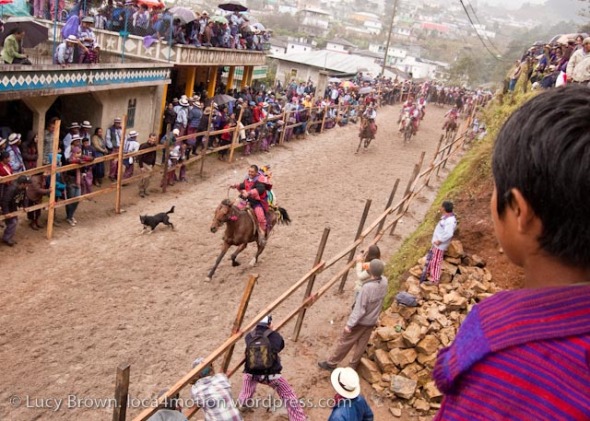 For the race, they wear a ceremonial red sash and their everyday straw hat brims with streaming feathers and multi-colored ribbons symbolizing the sacred quetzal bird.

Helped onto the back of a horse, rented especially for the day, these inebriated jockeys set off unsteadily in a muddle of flying legs and flailing arms, whooping and singing loudly, pounding point to point along a short dirt track in the cold mist and drizzle.

With no official start or finish, riders stop briefly at each end of the track to snatch another mouthful of booze before wildly dashing back in a tattered group, hooves throwing clods of dirt in the faces of onlookers. 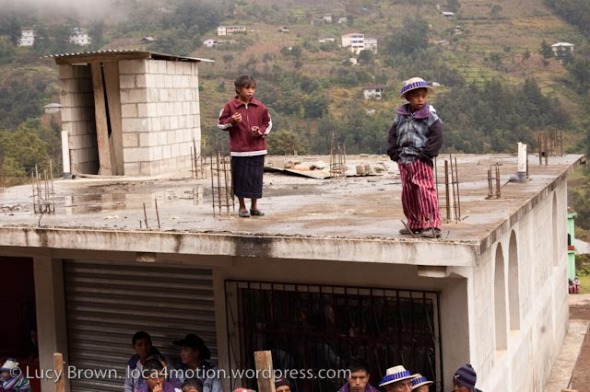 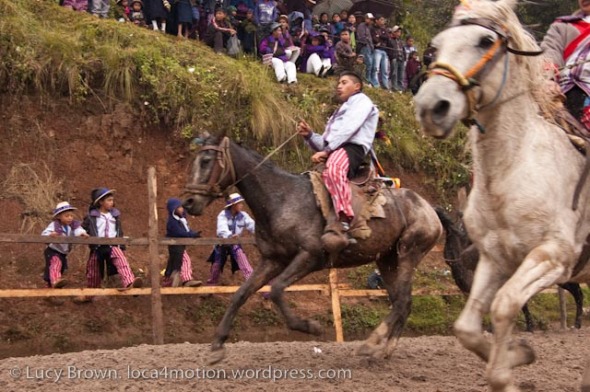 Some tumble in the mud but are quickly dragged out of the path of oncoming steaming, rain-soaked steeds by helpers along the track. The chaos continues for seven hours, stopping only for lunch, participants joining and leaving (usually when they’re too drunk to stay on the horse) the event as they wish.

Spectators are mainly colorfully clad locals from Todos Santos and surrounding settlements with a handful of outsiders. Crowding against the wooden railings or scrambling up a steep grassy incline for a birds-eye view, neither cheering nor clapping, each village’s distinctive costume clashes against its neighbor. 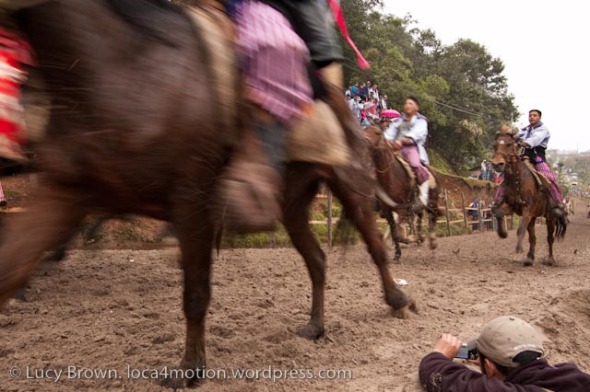 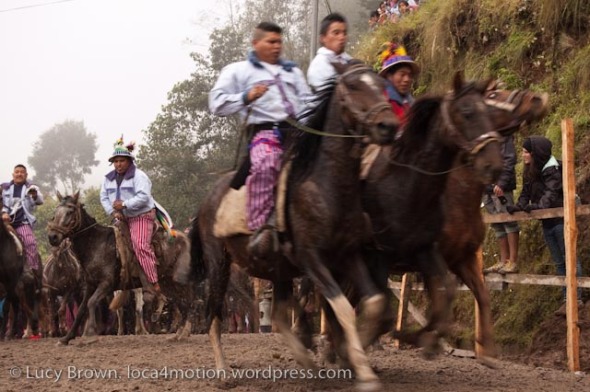 Like no other horse race I’ve seen, Skach Koyl as it’s called in mam the local Mayan language, is more a rite of passage than a competition as there’s no winner. Its roots are vague but most agree it began around the time of the Spanish conquest when the Spaniards introduced horses to the region.

Mayan tradition expects village men to participate four times in a lifetime. The final year on the last mad dash along the track the jockey brandishes a live chicken triumphantly as he rides. Later that night he eats the entire bird alone to signify the end of his obligation.

The festival continues as families pay their respects to departed loved ones, praying and decorating tombs with gaudy garlands. The merry dance, beer in hand, in the grave choked hillside cemetery alongside marimba playing musicians.

The intrigue of new people and places, customs, foods and festivals not only quenches my lust for travel and adventure but provides an income too. Trips like these can pay for themselves with a little effort in the field to take photos and gather fodder for articles. But when you’re living your dream, doing what you love, you can hardly call it work! 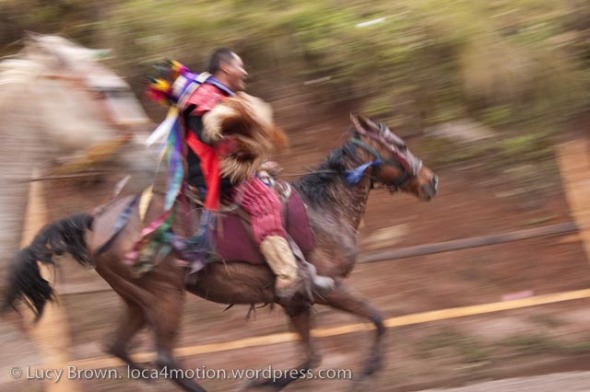 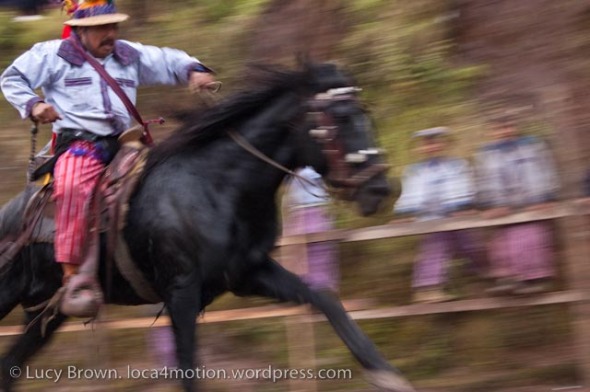 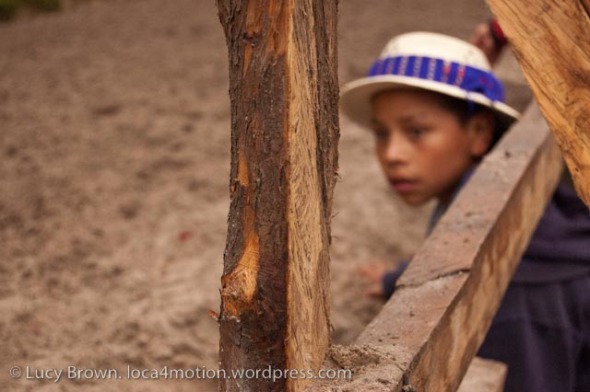 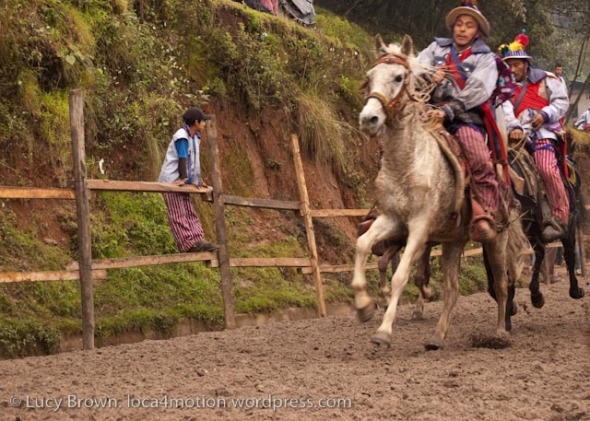