Horse racing was the Three Manly Games event of the Nadaam competition that I had most looked forward to since arriving in Mongolia and it proved to be the most raw and authentic.

It took place on the steppe a few kilometers out of the capital Ulaanbaatar and to get there two uncles of my newly wed sister-in-law Anna drove us in 4WDs. The roads were so congested, as this was a national holiday and such a popular event, that we cut across country which was an adventure in itself.

A muddle of unmarked dirt tracks crisscross this barren, open landscape, splitting off in various directions and enough to confuse the most skilled orienteer. We weren’t the only ones out there. Lines of cars streamed along behind each other but everyone seemed to know where they were headed.

We were tossed around in the back seat over ruts and potholes until we almost reached a traffic choked, paved road where police forced us to turn back. Then it was mayhem for a while as all the cars tried to maneuver out of a tight dead-end while still more arrived.

We cut back across the steppe partly on dirt tracks and the rest of the time off-road. Finally we reached our journey’s end, the race finish line, which was a flurry of activity with droves of people walking or riding around on horseback, many in traditional Mongolian costumes. There was an excited buzz in the air as they waited for the race finale. 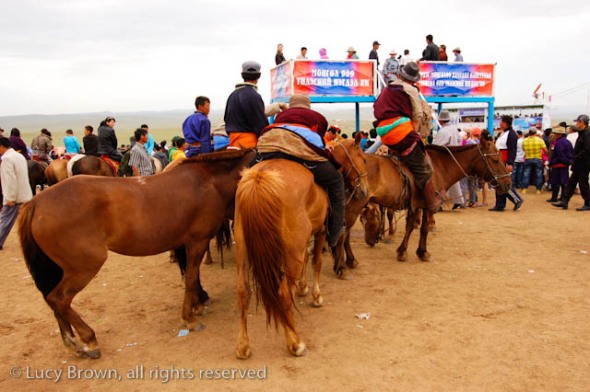 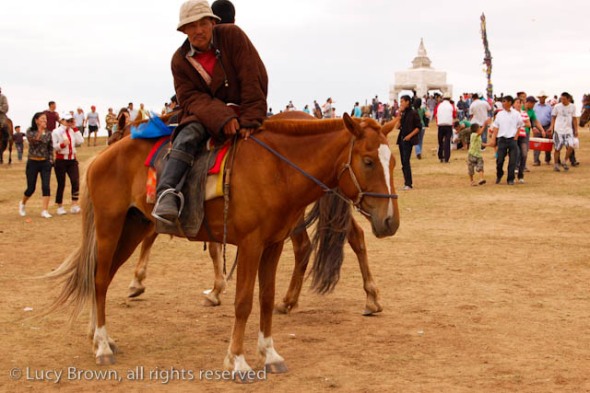 In Mongolia, horses far outnumber the human population and, despite their small size, are horses not ponies. Mongolians are so deeply proud of them that a traditional gift to a three-year old male child is a horse. They are extremely tough, surviving out on the steppe during the harsh winters and are an essential part of daily life. Nomads use them to herd their huge flocks, sometimes they eat the meat and they use the mare’s milk to drink or ferment it to make airag, the national alcoholic beverage. The best they train to race and winners are highly prized.

Everyone lounging around on horseback waiting for the race to come in. 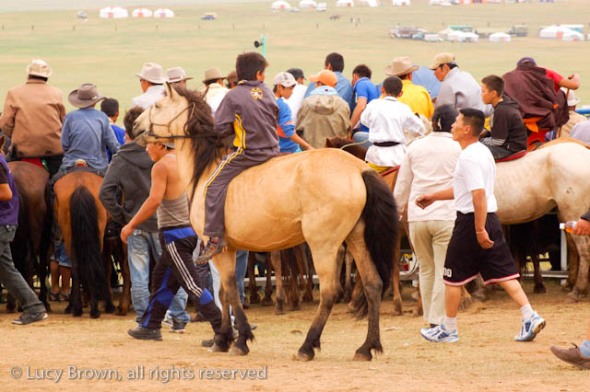 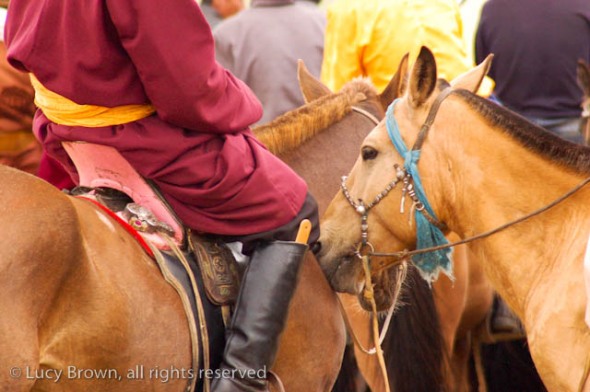 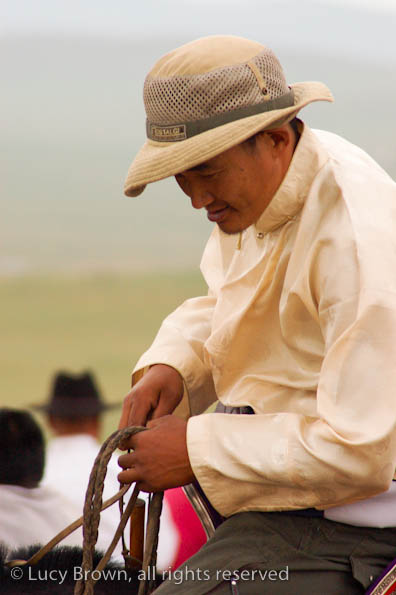 This kind man let me sit on his Russian horse which is bigger than the Mongolian. It was the first time I sat on a horse in Mongolia but not the last.

Exquisite saddle on the Russian horse.

Nadaam horse races are long distance, cross-country events held on the open steppe with no set track or course, ranging usually from an exhausting 15-30 kilometers long depending on the age class of the horse. Up to 1000 horses compete from all over Mongolia.

Jockeys are from 5-13 years old as the main purpose of the race is to test the speed and endurance of the horse and not the rider’s skill.

Before the race starts spectators sing traditional songs and jockeys sing a special song called a gingo. As the winning horse crosses the finish line, everyone dashes to touch its lucky sweat and they sing to the last horse in the two-year old class wishing him luck. Prizes are awarded to both horses and jockeys.

The race coming in fast across the steppe.

Everyone cheering and standing up on their horses to get a good view. 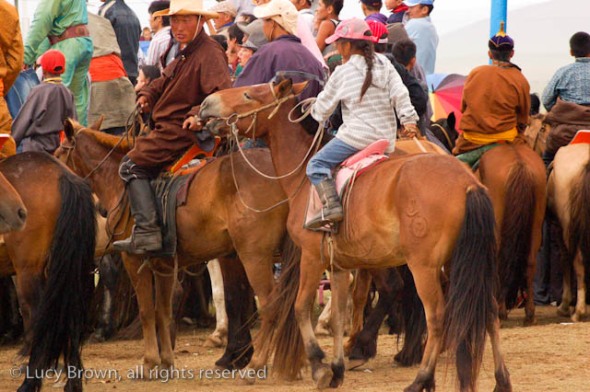 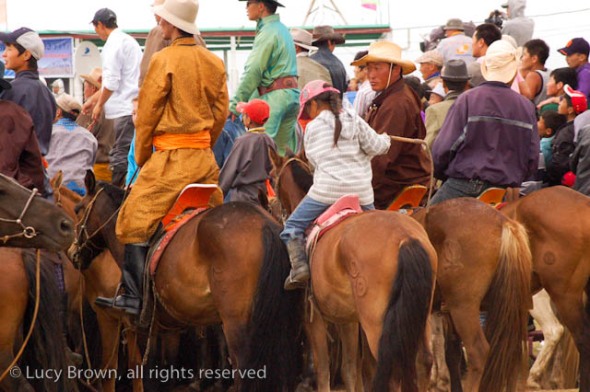 Standing up on their horses to get a view of the race.

Unusual attire for riding but here there was a mix of everything.

Closing in fast almost at the end of the race.

A view of the race trailing across the vast steppe. 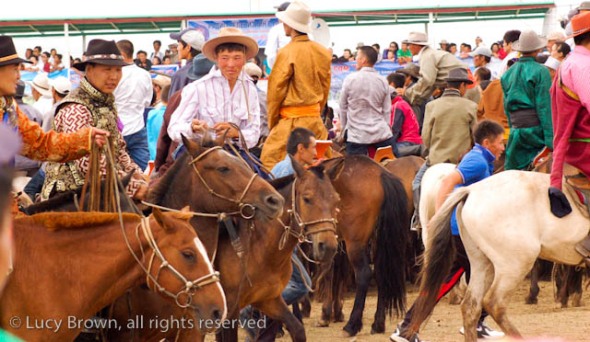 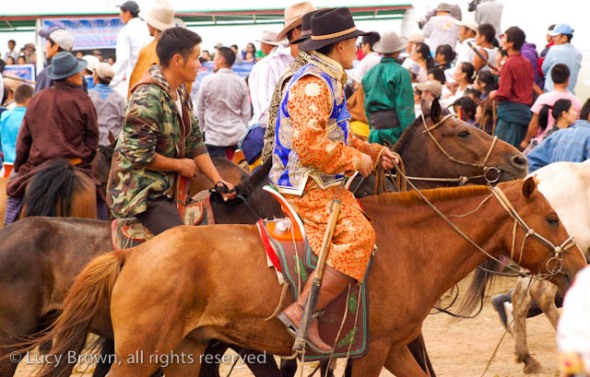 Horseman wearing a brightly colored deel, the national costume. This robe-like garment is daily wear for many Mongolians. Here there was a real mix of traditional Mongolian and western style clothing. 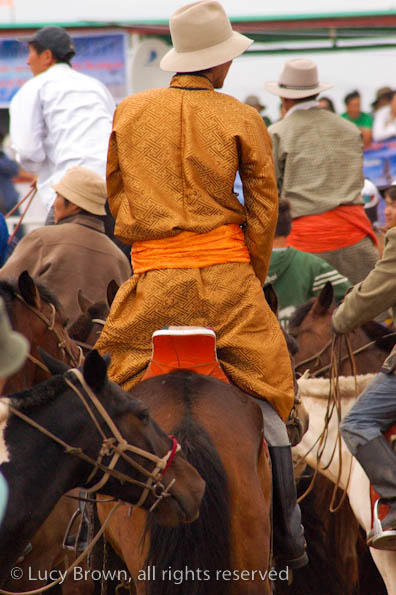 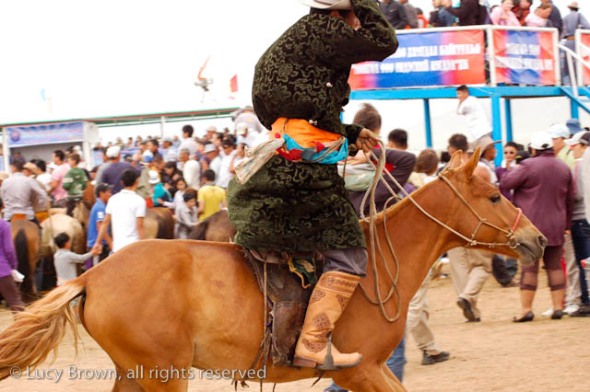 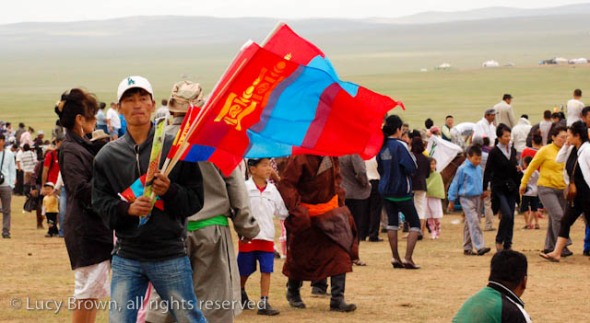 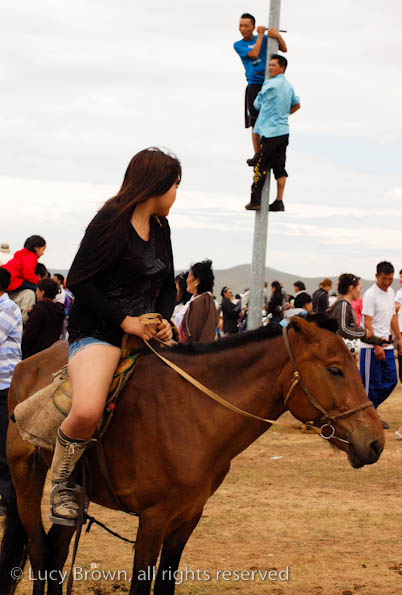 Climbing for a better view. 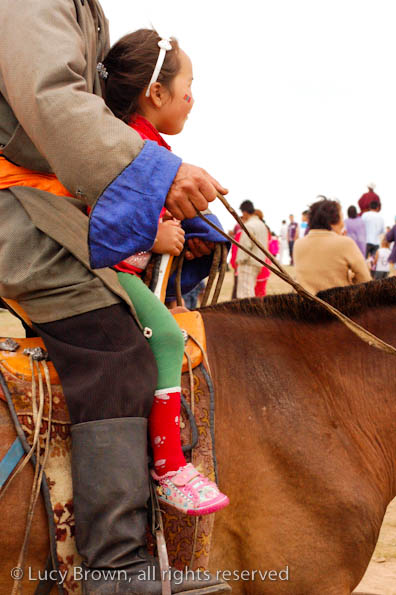 Everyone gets around on horseback. 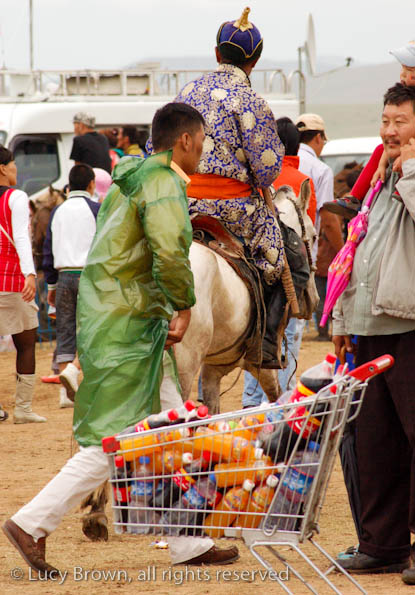 Selling drinks out of a shopping cart. 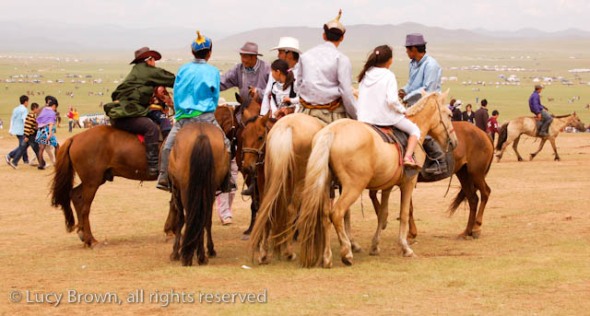 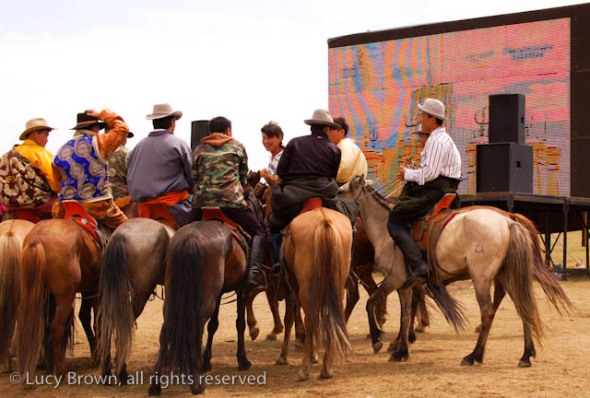 Watching the screen on horseback. 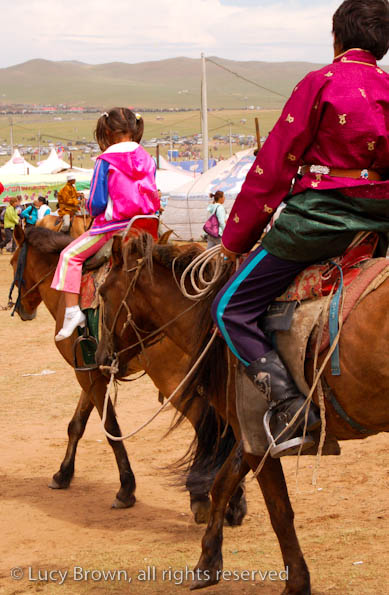 Gers in the background. 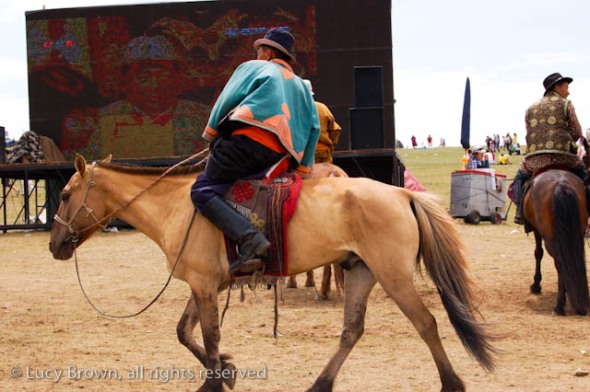 The two uncles waiting for lunch.

Mongolian flag. The yellow symbol on the left is the national emblem or the Soyombo seen everywhere. It has representations of fire, sun, moon, earth, water and the Taijitu or Yin-Yang symbol. 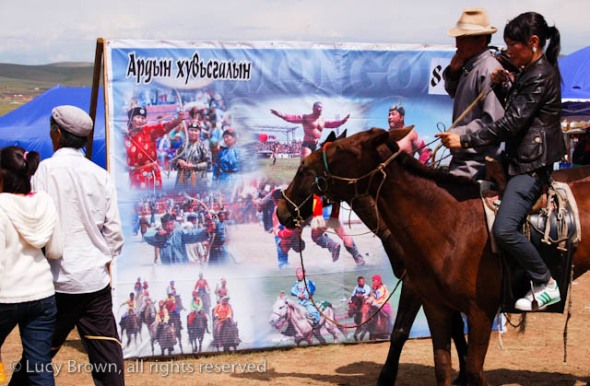 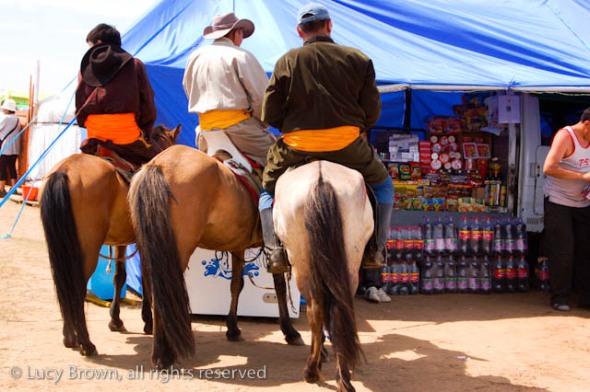 Stopping by at the store.

Billiards on the steppe.